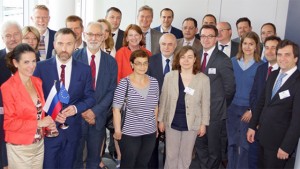 The EU-Russia Joint Science and Technology Cooperation Committee meeting took place in Brussels on 23 June 2017, co-chaired by the Director for International Cooperation of the European Commission’s Directorate-General for Research and Innovation Ms. Cristina Russo and the Director of the Department of Science and Technology of the Ministry of Education and Science of the Russian Federation Mr. Sergey Matveev. The discussion was held in a friendly and constructive spirit.

The meeting took stock of progress made in EU-Russia cooperation in research and innovation and confirmed joint flagship initiatives in the fields of research infrastructure, health and aeronautics. Russia confirmed its intention to host the EU Contest for Young Scientists in 2019 and to cooperate with the EU in Open Science policies and in young scientist exchanges.

Policy Dialogue
The European Union and the Russian Federation have a strong history of cooperation in science and technology, based on common interests and mutual benefit.

In 2003, the EU and Russia agreed to reinforce their cooperation in research and development by working towards the creation of a “Common Space in Research and Education, including Cultural Matters” (the so called “4th EU-Russia Common Space”) in the framework of the EU-Russia Partnership and Cooperation Agreement, and on the basis of common values and shared interests.

Cooperation in research and innovation is also one of the priority areas foreseen in the EU-Russia Partnership for Modernization agreed on at the EU-Russia Summit of June 2010 as a shared agenda to help tackle global economic and societal challenges.

Institutionally, EU-Russia S&T cooperation is coordinated by the Joint S&T Cooperation Committee and several EU-Russia thematic working groups, established under the Agreement on Cooperation in Science and Technology. The joint working groups, which meet regularly to discuss potential research topics of mutual interest and prepare joint actions, cover the following priority areas of research: aeronautics; energy (nuclear and non-nuclear); environment; food, agriculture and biotechnologies; health; ICT; infrastructures; nanotechnologies and new materials; e-infrastructures; researchers’ mobility; Space. All actions agreed by the working groups are set out in a roadmap for action.

The 2011-2013 EU-Russia S&T Cooperation Roadmap provides information on the achievements of ongoing EU-Russian cooperation through both the EU and Russian funding programmes, describes actions which are currently being planned, and sets out potential new actions for strengthening cooperation and building a strategic partnership between the EU and Russia in research and innovation.

One of the most established forms of EU-Russia S&T cooperation is the participation of Russian scientists in the EU Framework Programmes for Research and Technological Development, where Russia continues to be the most successful international cooperation partner country in terms of the total number of participations in the programme, the total amount of EU financial contribution received and the number of collaborative actions launched. EU researchers, for their part, successfully participate in Russia’s Federal Targeted Programmes (FTPs), such as the FTP “R&D in Priority Fields of the S&T Complex of Russia (2007-2013)”.

In 2007 a new cooperation mechanism of ‘coordinated calls’ for co-funded research projects between the EU and Russia was introduced. To date, ten coordinated calls have been completed in such areas as health; food, agriculture and biotechnology; ICT; energy; aeronautics; nanotechnologies; nuclear energy.

EU-Russia S&T cooperation also takes place through other international fora and large-scale research infrastructures, for example the EU X-ray Free-Electron Laser (XFEL) and the Facility for Antiproton and Ion Research (FAIR); the International Thermonuclear Experimental Reactor (ITER); the European Organisation for Nuclear Research (CERN). Russia and the EU also collaborate within the framework of the Group of Senior Officials (GSO) on global research infrastructures, composed of representatives of the G8+O5 countries.

The strength of the EU-Russia relationship in S&T is demonstrated by the popularity of EU researchers’ mobility programmes, such as the Marie Curie Actions (under the EU Framework Programme), TEMPUS (promotion of higher education development in Russia), and Erasmus Mundus (establishment of partnership networks between European and non-European universities elaborating joint Master programmes). These initiatives serve as an important tool of Russia’s integration into the European Research Area and the European Higher Education Area.

A review of EU-Russia cooperation in the field of research, assessing in particular the implementation and impact of the S&T Cooperation Agreement concluded between the European Community and the Russian Federation (“EU-Russia S&T Agreement”) was performed between November 21, 2012 and March 31, 2013.The review was performed by a joint EU-Russia group of independent experts with two members (Päivi Karhunen and Uwe Meyer) appointed by the European Commission, and two members (Pavel Kadochnikov and Vladimir Popov) appointed by the Russian Ministry of Education and Science (RMES).

Projects
ERA.Net RUS Plus (2013-2018)
The ERA.Net RUS Plus initiative aims at enhancing the coordination of research programmes between the EU Member States (MS)/Associated Countries (AC) and Russia. The project will implement Joint Calls for excellent transnational research projects in the fields of NMP, Health, Environment, SSH and Innovation.
Project Website

BILAT RUS Advanced (2012-2015)
Enhancing the bilateral S&T Partnership with the Russian Federation (BILAT-RUS-Advanced) project aims to facilitate the science – technology and innovation cooperation between Russia and the EU.

The web portal offers information about the Russian S&T landscape and funding opportunities from the EU and Russia for the implementation of joint scientific activities.
Project Website