On November 13, 2020 the 8th BRICS Science, Technology and Innovation Ministerial Meeting, one of the key events under the Russian chairmanship in BRICS, was held. The results of cooperation in science, technology and innovations were summed up, the BRICS STI Declaration 2020 was adopted and the Calendar of BRICS STI Activities for the next year was approved. 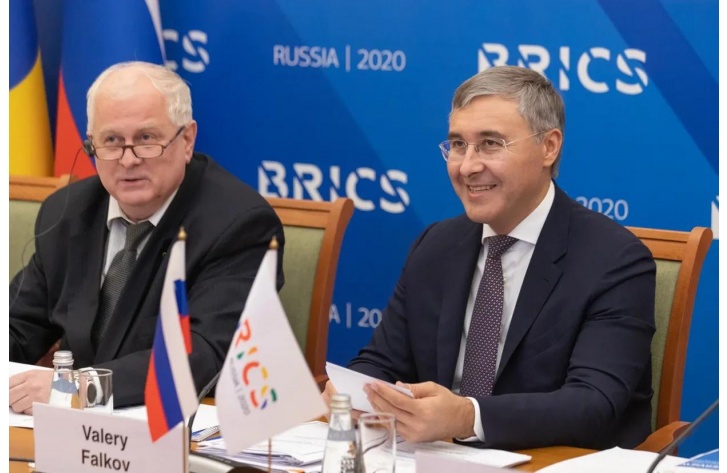 The meeting took place on the fifth anniversary of the adoption of the BRICS Memorandum of Cooperation in Science, Technology and Innovation. The Russian Federation was represented by the head of the Russian Ministry of Science and Higher Education Valery Falkov.

“The stability of the dialogue once again testifies to the special importance of interaction between the BRICS countries. Long-term partnership is also confirmed by the successful 5-year implementation of the Memorandum of Understanding, which laid the legal basis for the progressive development of scientific and technical cooperation. And, as a result, this year I am pleased to note the productive holding of more than 20 events in the priority areas marked in the document,” said Valery Falkov, opening the meeting.

The 2020 Declaration also highlights the cooperation of BRICS scientists to counter coronavirus infection. In a short time, a call for multilateral research projects of the BRICS countries in 2020 was organized and launched. Prior to the call launch six expert discussions were held with the participation of more than 300 representatives of the scientific and business communities from all countries of the interstate association.

The Calendar of Activities adopted at the Meeting contains events planned in all BRICS countries in such areas as biotechnology and biomedicine, photonics, astronomy, materials science, as well as in the field of technology transfer and innovation, entrepreneurship development and innovative partnership.

The next meeting of the BRICS Ministers of Science, Technology and Innovation will take place in India, which will chair in BRICS interstate alliance in 2021.